Home » News » News » How to start an indoor trampoline park?

How to start an indoor trampoline park?

Over the past decade, the indoor children's trampoline park industry has grown rapidly as children and adults alike enjoy bouncing on trampolines and playing games. If you're considering opening a trampoline park, now is a great time to start. So what should you look out for when considering starting your own indoor trampoline park business?

What should be considered when opening an indoor trampoline park?

How much does it cost to open an indoor trampoline park?

Since trampoline became an Olympic sport in 2000, its popularity has skyrocketed. Rather than simply playing trampoline in the backyard, many intrepid trampolinists have taken the huge step of going to a "pay to play" trampoline center. These participatory trampoline centers offer fun, healthy exercise, planned events, and even competitive dodgeball games, all played on safely designed trampoline jumps. Currently, there are more than 500 trampoline parks in the United States and 100 internationally. According to the International Association of indoor trampoline park  of the data, in the past three years, the number of indoor trampoline park in double every year (2013, 2014, 2015), which makes this part of the outdoor entertainment industry has become now the fastest-growing category. The IATP has more than 240 members and is growing rapidly. This is called "traction," meaning that when an industry has established itself and is growing rapidly, rubber meets the road. Internationally, growth is fully open and opportunities are "unlimited." 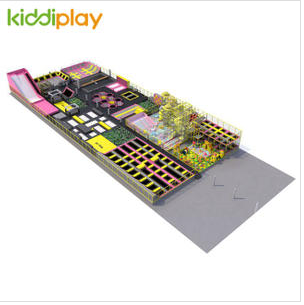 What should be considered when opening an indoor trampoline park?

As an entrepreneur, a clear plan is critical to success. It will help you plan the details of your business and discover some unknowns. Some important issues to consider are:

1. What are the start-up and ongoing costs?

2. What is your target market?

3. How long will it take you to break even?

4. What would you name your company?

How much does it cost to open an indoor trampoline park?

Operating an indoor trampoline park is often expensive. Start-up costs are in the low seven figures on average, because trampoline parks often have to be customized. There are two steps business owners can take to reduce their expansion costs slightly, though they cannot eliminate them entirely. First, business owners should get quotes from multiple contractors. Business owners should contact several contractors that specialize in indoor trampoline parks and ask them to bid. Winning multiple bids not only shows how different contractors will charge for the work, but it also gives the owner several design considerations. One design may be simpler than another, and therefore much cheaper. Second, business owners can look for buildings that already have open space. Choosing a large, open area will reduce any costs associated with removing walls, counters or other structures that are already in place.

Some of the buildings that might be good sites are old industrial buildings and old barns. Both offer plenty of open space and are often located in low-rent areas. Although they may be in rural or industrial areas, guests will usually drive to the indoor trampoline park, even though it is a bit remote, as it offers a unique business. If you don't want to build your own brand new trampoline center, you can buy one off the shelf. Often, the center you are considering buying has a specific record of revenue and expenses. Even if the company is losing money, if you can buy it for a fraction of the cost (I can't resist the phrase) and make a profit within a week of closing the deal, you'll jump for joy. Startups, on the other hand, can take a year or more to turn a profit. In addition, the well-established centre may already be operating optimally and efficiently and has been well evaluated. They will also be easier to raise money because they have historical income documents and assets that you can show investors and sources of funds.

Running an indoor trampoline park is a great way to do this. Trampolines are not only fun, but also good for your health. As long as you follow most of these tips, you're well on your way to running a successful long-term trampoline park business.If you need to purchase a variety of high quality equipment for indoor children's trampoline parks at a reasonable price, Kiddi Amusement Co., Ltd., will provide you with the best products.